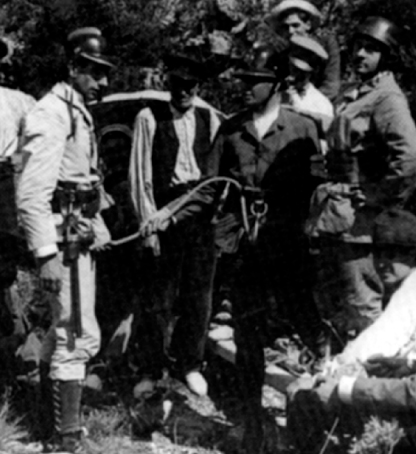 After the birth of speleology in France at the end of the 19th century, the new sport- science also began to spread in Spain.

Although the first documented exploration of a great chasm in Spain is possibly the 120-metre descent of the Sima de Cabra (Córdoba) in 1685 by Francisco Muñoz Romero in order to rescue a person who had been thrown into it.

Later, especially from 1800 onwards, the first topographies of different caves began to be carried out throughout Spain, giving rise in 1896 to the first Spanish speleological catalogue with its publication in Madrid by the mining engineerDon Gabriel Ramón Manuel Puig y Larraz of "Geographic and geological catalogue of the natural caves and primordial mines of Spain".

Although the great precursor of speleology in Spain would be the priest and geologist Norbert Font i Sagué. Font i Sagué began to practice and spread caving when he became fascinated by this new sport- science after accompanying E.A. Martel during his visit to Catalonia in 1896. In 1897, just one year after meeting Martel, Font i Sagué published the first Speleological Catalogue of Catalonia, where he registered 333 caves. 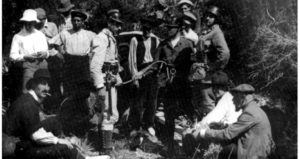 In the centre of the picture, Font and Faura strung together with Serafí Alemany. On the right Co de Triola looks at the camera. Year 1907 AF CEC

In honour of such a remarkable man for the dissemination of speleology in Catalonia, in particular, and Spain, in general, the Federació Catalana d’Espeleologia awards the following prizes every year “Font i Sagué”to the best work done by Catalan speleological groups.

From then on, little by little caving begins to penetrate the circles of scientists and mountain clubs. During this period, men such as Marià Faura i SansA disciple of Font i Sagué, Rafael Amat i Carreras, or Francesc Español CollThe first of these, who with their studies and explorations expanded the knowledge hidden in the cavities.

But it is from the middle of the 20th century, with the evolution and improvement of the material necessary to practice speleology, much lighter, safer and above all, more accessible to a larger public, that it begins to become popular and a multitude of clubs arise throughout Spain.

In addition, the increase in speleologists with a more sporty motivation, made the activity part of the Federación Española de Montaña in 1967, with the National Committee of Speleology.

After several attempts, in 1979 the National Speleology Section was constituted, ceasing to depend on the Spanish Mountain Federation, a process that would culminate in the approval of the statutes of the new Spanish Speleology Federation (FEE) in 1983.

30 years later, the vivid economic crisis in Spain together with bad management caused a serious economic situation that led to the federation's bankruptcy, finally, in April 2015 a judge ordered the liquidation of the federation. Months before this same situation caused disputes with different territorial federations, leading to the creation in 2014 of the Confederación de Espeleología y CañonesThis is the confederation that groups together 11 of the 15 autonomous federations in Spain.

History of Speleology 1: The birth of a new science